How Green is Your Tech? 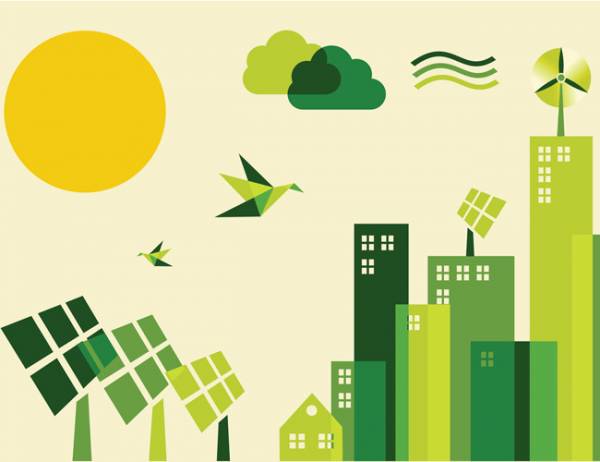 Climate change is on nearly everybody’s mind, in one way or another. Becoming more aware of the effects of emissions on the environment, people are looking for “greener” ways to live, from buying local (and sustainable) food and products, traveling via lower-emission transportation methods, and building up recycling and composting programs.

There are some obvious things that help — like riding a bike to work or turning off the lights when you leave a room — but everyone tells you that stuff. As a technology company offering public and private cloud hosting services, we wanted to focus on some of the ways that everyday technology consumption like email, social media, and data storage affects your carbon footprint.

Before you hit send…

Okay, 4 grams doesn’t sound like much, and in the grand scheme of things, it really isn’t. Four grams is about how much sugar Mary Poppins advises will help the medicine go down. But think about how many emails you send each day, then multiply that by 365. That’s a lot of sugar.

Basically, each year the average person emails an amount of carbon equal to the exhaust of a 200-mile car ride. Looked at from a different angle, all the emails sent scurrying around the Internet in a single day generate more than 880 million lbs. (that’s 44,000 tons!) of carbon per day.

Now, this isn’t to say that email is a bad thing: it’s certainly better than sending all of those messages on paper in paper envelopes using sticky paper stamps. But there are a lot of ways to cut down on carbon by checking the number of emails that go whizzing from server to server.

Stop replying to all

The “reply to all” function works by sending duplicate emails to all of the people listed in To: box. So instead of sending one email to lots of people, it’s actually sending separate emails to individuals — and multiplying your email-generated carbon footprint at the same time. Before replying to all, take a quick moment to see if everybody on the list really needs to get your message. You’ll save a few grams of carbon, and you’ll avoid aggravating all those people who might otherwise ask, “Why the heck did you send me that?”

Becoming intimate with your email app’s search functionality can save carbon, time, and sanity. Instead of asking your colleague to re-send that document you need for the big presentation, do a quick search of your inbox and archives to see if you have it already.
Don’t spam. Nobody likes to think they’re a spammer, but it happens. Even reputable companies with great products tend to carpet-bomb people’s inboxes with marketing messages that go mostly unread, in the hopes of finding just one more loyal customer. Just because you can send an email to anyone and everyone doesn’t mean you should. Tailoring your audience help you increase conversion rates while cutting back on carbon.

On the flip side, if you’re receiving emails that you don’t have time to read, take a minute to remove yourself from the mailing list. It’ll help keep your inbox clean, and you can feel even better knowing you’re helping to trim your carbon footprint.

We’ve all done it; emailed that person who is sitting close enough that you could literally talk to them without even raising your voice. Instead of sending that email, have a little chat. Even if they’re down the hall, get up and go talk to them. Guaranteed, you’ll use less carbon by talking than you would by sending that email.

Speaking of conversations, maybe emails aren’t your thing. Keeping messages short and sweet — say to the tune of 140 characters, a quick pic or a sentence-long status update — can’t really take up much carbon, right?

Actually, that is right. The carbon footprint of a tweet is estimated to be 0.02 grams.[2] Facebook has reported that the average user consumes about 311 grams (0.7 lbs.) per year, which has about the same impact as a medium latte.[3] (Hey, at least it’s not a “venti.”)

Still, those calculations only take into account what’s happening on the company’s end. If you’re using your laptop, tablet, or smartphone to explore social media sites, chances are you’re not simply posting and then leaving. You’re probably browsing a bit, seeing what your friends are up to, making some comments, playing a game or two, engaging in highly politicized debates with unreasonable so-and-sos who just don’t understand how the real world works. That sort of thing.

Let’s face it, most of that stuff is probably a waste of time — and a waste of carbon. There’s nothing wrong with using social media, but cutting back isn’t a bad thing either. While reducing social media usage isn’t going to stop global warming on its own, every little bit does help. Here are a few thoughts to keep in mind:

Look up once in a while

How social is it to spend your time looking at your phone? If you’re out and about with a group of friends, focus on what you’re doing, rather than what other people are up to. Sure, it’s okay to post the occasional status update or share a pic or two, but constantly bending your neck is carbon wasteful and may ultimately lead you to a chiropractor’s office.[4]

It’s okay to miss something

The “Fear of Missing Out” (FOMO) is a psychological condition that has been exacerbated by the explosion of social media.[5] While connecting with people you don’t get to see every day can be wonderful, if you’re scouring your friends’ posts to judge whether their activities are more interesting than your own, you could be missing out on the simple enjoyment of being “in the moment.” Save some carbon and anxious brain cycles by turning those push notifications off.

Maybe Instagram just isn’t your thing. Maybe you don’t really understand the appeal of tweeting. Or maybe you signed up on Google Plus to get more exposure for your business, book club, or improv group. Whatever the case, if you’re not using a particular social media site, deleting your account can decrease your carbon footprint while also helping you declutter your online presence and protect your privacy. Just Delete Me has direct links to the delete pages for hundreds of social media sites, with a visual guide of how easy it is to send your account into cyber-oblivion.

With the rise of cloud computing, you can reduce your personal carbon footprint by relying on the economies of scale that cloud storage provides.

We’re not gonna lie: Data centers use a lot of energy. But as a company, some of the ways we’ve managed to reduce our own carbon footprint is by installing LED lights, taking advantage of cool-weather conditions — such as that chilly polar vortex that swept down near our data centers in Chicago last winter — and making strides in server virtualization, which helps us run our processors at peak efficiency.
In thinking about data storage for your own personal or company use, it’s worth asking yourself whether you’re wasting energy, space, and money by keeping your servers on site.

All computers have an energy overhead, and in our experience most on-premises servers tend to be under-utilized. Some of the most efficient network hardware costs an extreme amount of money and also requires large amounts of use to make them cost effective. Rarely can the average business justify such purchases, not just in money, but also in utilization. Using a managed hosting service that optimizes its networked hardware for maximum efficiency can help you save carbon while reducing your monthly energy bills.

Most on-site servers use consumer-level cooling systems, utilizing carbon-excessive air conditioners, fans, or possibly water cooling systems that tap into municipal supplies. Cloud storage centers, however, can develop custom cooling technologies that are much more efficient on a per-machine basis.

Back up smartly. Even if your main server is on the premises, you still have to worry about offsite backups to protect your company and customer data. Setting up a second server can multiply your carbon footprint and jack up your costs. Using cloud computing providers that use efficient architecture and virtual machine solutions can give you the piece of mind you need, and save you money, while helping you edponentially

Global warming won’t be solved by any single person, company, or even government. It’s going to take a lot of people all over the world working together to understand how their everyday activities affect the environment.

In the end, it’s about awareness. Hopefully this post has helped you learn more about a few of the ways you can make small strides in reducing carbon consumption through technology. And we know we can always learn more, too. We’d love to hear some of your own tips and ideas!