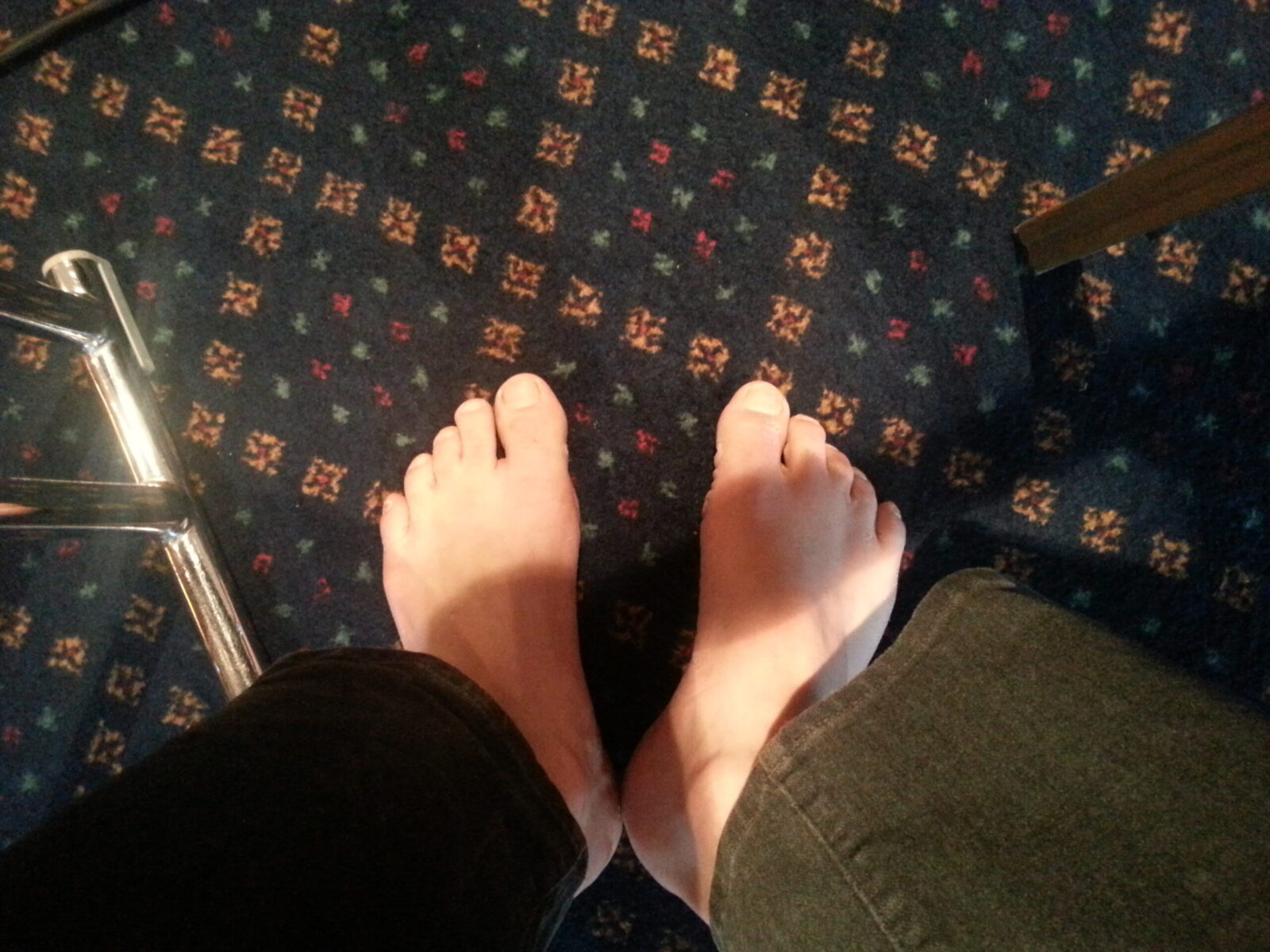 Last summer, my family and I were on a trip to Spain, visiting the area of Costa Brava, and some good friends who live there. We were there for almost 3 weeks, visiting the city of Barcelona, various museums, and the inland parts north along the coast, the Empuries (or Ampurias – in Spanish).

Visiting Spain for the first time, I didn’t know how people would react to my barefooting, and I didn’t know anything about what physical challenges I would encounter. That’s why I always brought my shoes in my backpack when going somewhere. The best part: Facing the unknown, new barefoot experiences.

We stayed one week at a family campground. Here I was barefoot all the time, no problem. This was a large area with lost of stairs, gravel, grass, and trees. There were a fair bit of pinecones on the ground and the paved areas. There were swimming pools, shops, bars and restaurants. No one from the staff or the other residents said anything about my bare feet, or talked about my “safety” in this area which was quite rough compared to an indoors facility, e.g. a museum or a shopping mall. It was a great experience!

The city and the smaller towns, going out

Barefooting on the streets was OK. People looked at my feet sometimes but I’m used to that. There was police on the streets, and some officers also noticed my bare feet, but no one said anything.

I didn’t have any problems at any of the places we visited, including restaurants and cafes, outdoor museum, a good number of shops, public washrooms, airports, and hotels. I’m very happy to say I had no problems anywhere. Even though, I don’t know for sure what people were really thinking about my barefooting, it seemed well accepted. 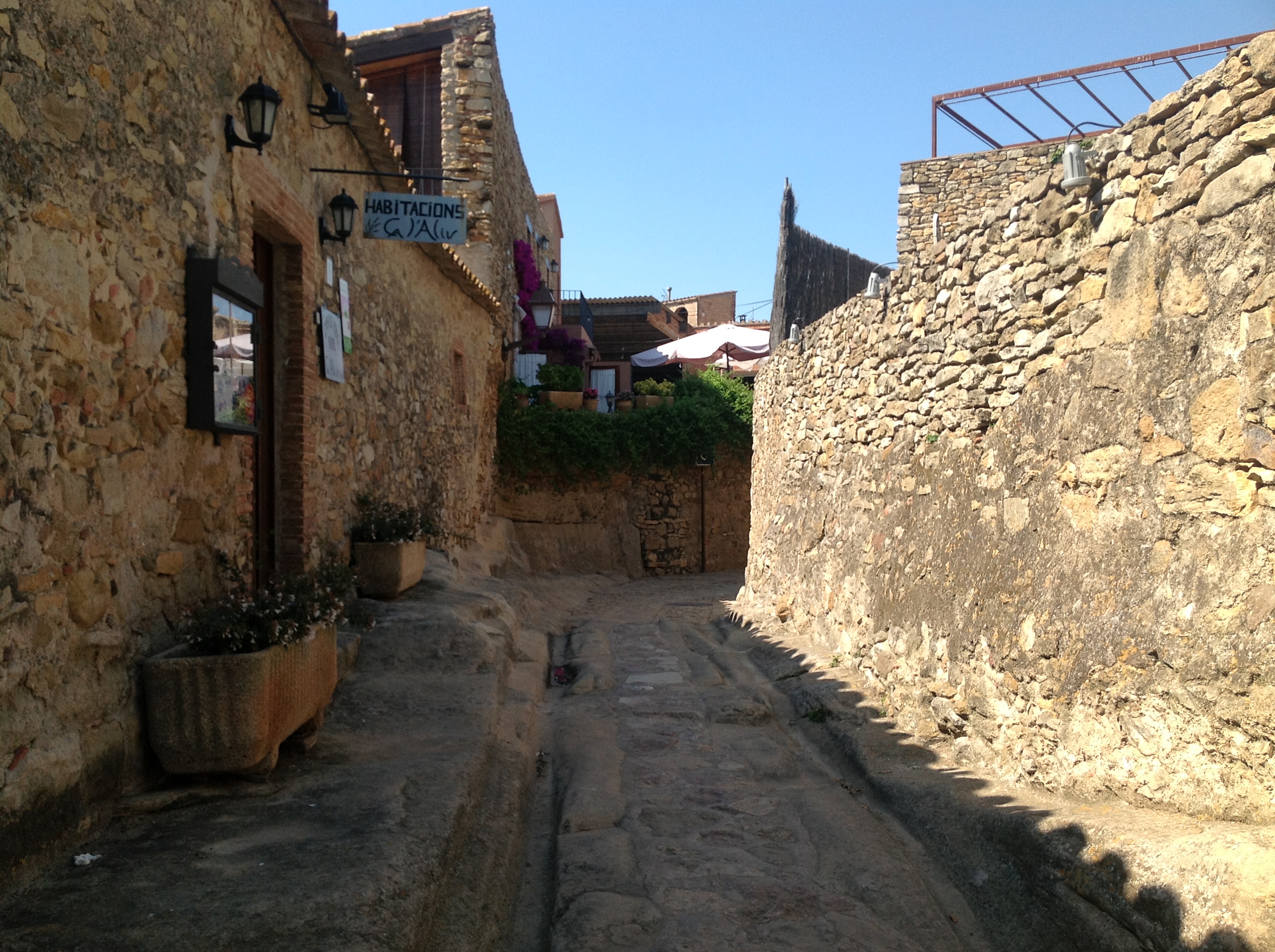 I’d say about 97% of the places we visited accepted my barefoot lifestyle; however, there were a few instances where I had to put on shoes:

Close to where we camped, there was a large store where we bought our groceries. The third day we shopped there, there was a guard at the entrance. He stopped me and said I had to wear shoes because of safety issues – store rules. He spoke little English, so I didn’t get into any arguments; I just put on my shoes and went about my business. The floor was very cold anyway.

The famous church in Barcelona, designed by architect Antonio Gaudi, is definitely worth the visit. Fantastic! Inside the church I was barefoot. Some guards noticed me, but made no comments. We took a guided tour, the tour guide did not comment either. I was very happy about this. Later on, however, in the gift shop, a guard noticed my bare feet after 10 minutes, and told me to put shoes on. I agreed, but I quickly paid for my purchase and left the shop. 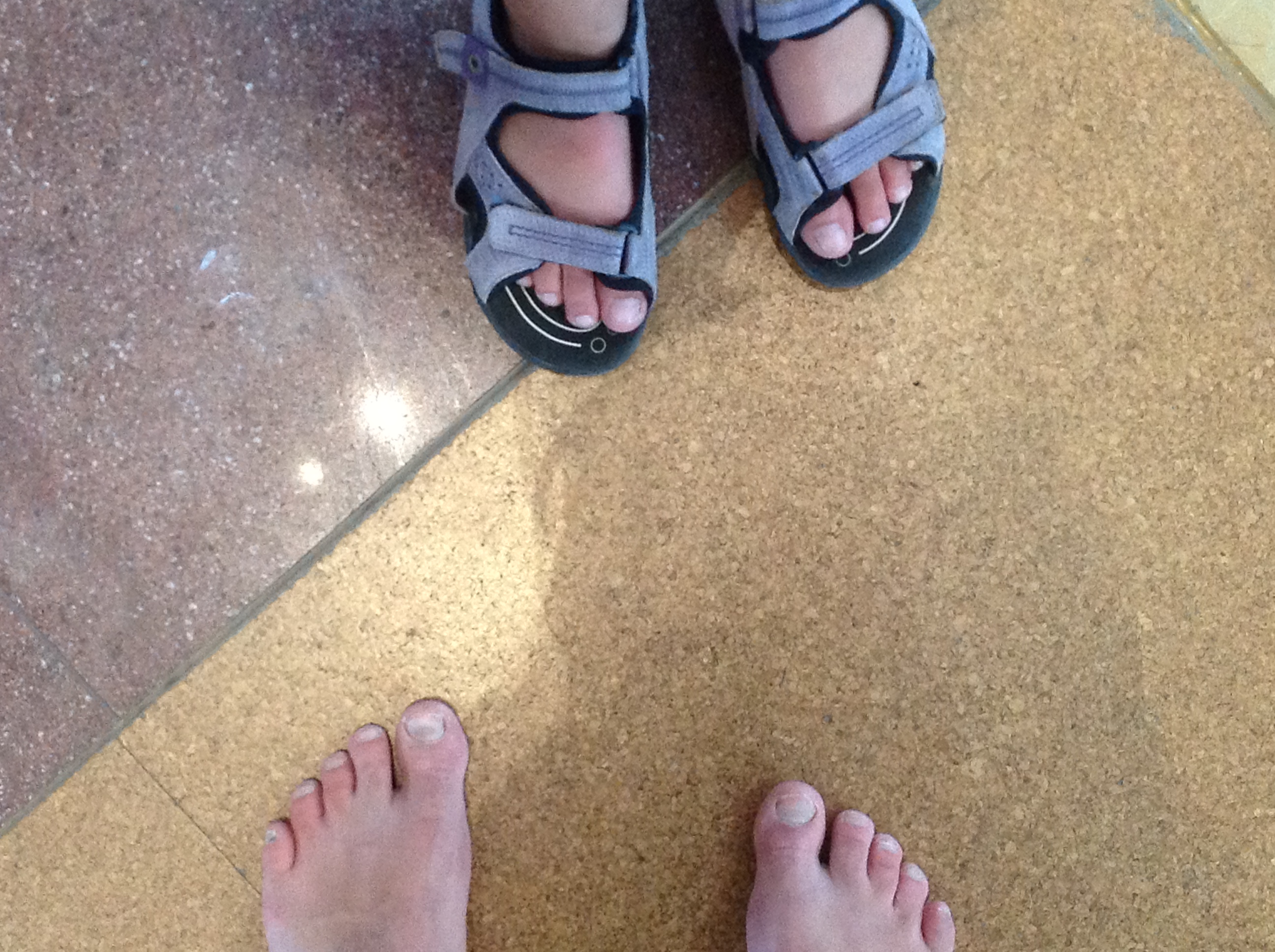 The floor in La Sagrada Familia. Some areas had cork floor.

The Museum of Dali

The guard in the doorway said nothing, but the guard where I deposited my bag said I had to wear shoes. I put on my shoes to get in. Halfway through the museum I took them off. I walked past several guards, and finally one stopped me. I put my shoes back on. It seems that some guards are OK with bare feet, while others are not.

The Museum of Miro

After having paid the entrance fee, put away my bag, and walked past 3 guards, one guard finally stopped me and told me to put shoes on. I did put shoes on, and then walked back to the guard. I asked her why shoes were required. She answered that it was just the rules. Another guard came, and I asked him if there was a dress code for the museum’s visitors. He answered that there wasn’t, but that it was not allowed to go naked (!) in the museum. He also said I could hurt myself against the walls (?) or step on some of the glass that was a part of the contemporary exhibition there. All artistic objects were separated from the public with a cord, and the floor was very nice and clean. I told then that going barefoot was my culture, my kind of art project. The answer was that I had to send a written application for doing an art project. I tried a few other arguments but eventually I had to put my sandals on.

After this, I was under careful surveillance by all the guards in the museum (at least I felt like I was).

Overall, I’m very happy with my barefooting experiences in Spain, as well as what I saw. Some of the people I met got inspired to do some barefooting. Those who told me I had to wear shoes were all security guards. I did walk past many guards, but only four of them reacted. I was never presented with any written rules that said one had to wear shoes. So it seems that it was only the individual opinion of the guards that dictated whether I was allowed to have my freedom as a barefooter or not. I can’t help but wonder if this constitutes discrimination against my personal preferences, my lifestyle, and my personal culture. Am I supposed to adhere other’s ideas about “decency” even if I find them unreasonable?

Some other observations during my trip

What about broken glass? I never saw one shard of broken glass.
Dog poo? -None.
Rusty nails? -None.
Sharp objects? Yes, in the kitchen drawer.
Rocks? Yes, everywhere, but they are not dangerous.
Dirt puddles? Yes, but I avoided those few puddles, as anyone with shoes also would.

Lastly, I want to send a big “thanks” to everyone who has supported my barefoot lifestyle!