You know your boss has your back when… 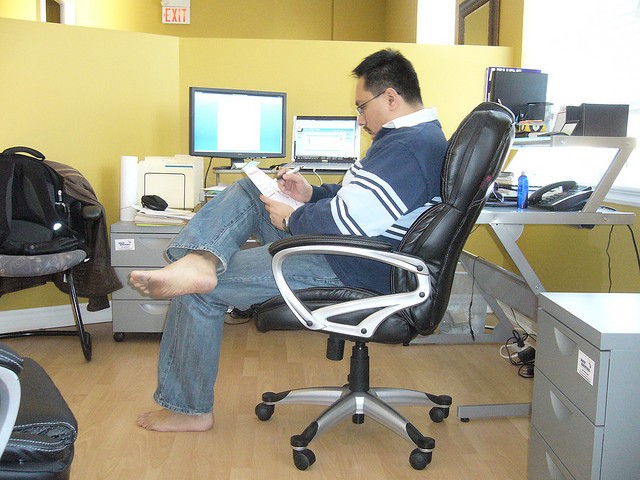 I had a interesting and endearing exchange at work yesterday. As many of you know, I’m lucky to be able to work barefoot most of the time and my boss and co-workers are very much used to it and very much aware of my lifestyle choice.

Anyhow, two web developers were hired last week and yesterday was their first day at the office. As usual, I was barefoot at work today but none of them said anything, or didn’t even seem faced at my lack of footwear; which I found rather refreshing, since I often find myself explaining my bare feet to new employees or clients when they first meet me.

Early in the afternoon, it occurred to me that the new guys might want to know about the offerings we have in the office kitchen in terms of coffee and tea so I rounded them both up and asked them to follow me so I could show them where to find their hot drinks.

While we were in the kitchen, my boss walked in and noticed I was giving the guys their “tour”. With a smile he said: “so, have you guys noticed Moe’s barefooting style?”. Both guys smiled and made some light comments about it. Then, one of them was quick to add: “Yeah! If you guys don’t mind, I might as well bring in my slippers”. Both my boss and I told him it would be completely fine; I, of course, told him that he could go barefoot if he wanted to.

When we were exiting the kitchen, the second guy, approached me with a smile and told me that my boss (who is also the owner of the company) had actually told him during his job interview that the dress code at the office was “shoes optional”. Now, THAT, I truly did not expect! You can’t imagine how happy I was  to learn how really supportive my boss is of my lifestyle choice.

Needless to say, I’m truly hoping that the first guy does bring his slippers in, and that this is only the first step towards his starting to go barefoot in the office. I have the feeling he didn’t want to push the envelope too far too quickly. Only time will truly say, but I can only be hopeful to finally have another barefooter at work with me…. Fingers and toes crossed!