Encounter with a Barefoot Runner 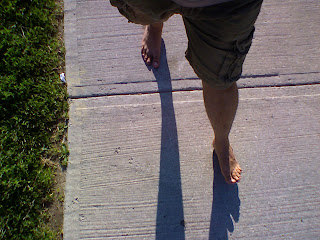 As many of you know, I’m no runner (barefoot or otherwise). I’ve been actually struggling with my fitness level since I gained substantial weight after starting my career as a graphic designer in my late 20’s – my lifestyle became increasingly sedentary as I got a job that kept me sitting at my computer most of the day…

Despite my ever-going admiration for barefoot runners, I have never seem to be able to get into it. The excuses are numerable: ranging from lack of time to the fact that I’ve never been a runner in the past… The closest I get to it these days is my “power walks”; which consist in 3 to 4 laps around the park near by my house(about 4 to 4.5km on average) 3 times a week or so.

So it happens that this week I have minimized my power walking because I messed up an old sprained ankle last week by using my elliptical trainer, which I have now determined it’s not appropriate for my height, late last week. Last night, however, I decided to go for an easy walk to the park to start getting myself back on track. I started slowly as hard surfaces like concrete are still irritating to my right ankle and parts of my foot arch. Once warmed up, I managed to get to a relatively good pace and I decided I to try to complete 3 laps around the park perimeter. So far so good!

By the time I was halfway my 3rd lap, I was starting to feel a bit of soreness coming back to my ankle, so I decided it was time to get back home once I completed my walk around the park. All of a sudden, and out of nowhere, I spotted this speedy runner coming in the opposite direction, darting through the other park walkers and joggers. I automatically shifted to my right to give way to the runner and, as he was approaching closer, I felt a rush of adrenaline through my spine when I noticed that he had no footwear on… I had to blink and re-focus to make sure my eyes were not playing tricks on me. As we crossed paths, my eyes locked on his bare feet and my head turned around as he zoomed past me – he didn’t even notice me or my lack of footwear. I thought about stopping him and talking to him but he was way too fast for me and my sore foot. I decided to pick up my pace a bit so I could intercept him on his way back around the park… My foot soreness seemed so insignificant given the unlikely event. My heart was pounding a bit, and not only from the power walk…

Sure enough, the speedy runner went around the park and caught up with my me at the other side of the park. This time I was ready and I flagged him down before he had the chance to zoom by again.

The guy stopped and was really friendly right from the get go. His Enlish was broken but we managed to communicate with a certain level of effectiveness. It turned out that this fellow barefooter is a recent immigrant from India. His name is Savi (not sure about the spelling), a young looking man with a pair of sturdy feet, and he’s been only running barefoot for a week or so here in Toronto. He explained to me that he used to run barefoot in India and, for what I could see, it’s clear that he was pretty accomplished. It also turns out he is my neighbour! He lives about 4 or houses away from me on the same side of the street!

Savi showed me his running technique (which was pretty similar to what I have seen on other barefoor runners’ sites: shift the weight to the front of the foot and land with the ball of the foot). He took me for a short run and an additional power walk lap, and told me that he usually does 3 laps around the park every day in this order: run – power walk – run. We agreed to meet again today so we can do some walking/running together.

Knowing my current fitness level, with the additional handicap of my sore right foot, I doubt I will be doing any extended running but I guess I need to start somewhere if I will ever do this. Having found someone so close to me is definitely an auspicious omen, and I have to take advantage of it at whatever level I can. I just hope Siva will be patient enough to let me catch up to him at my own pace. I will definitely write more about this new phase of my barefooting experience.