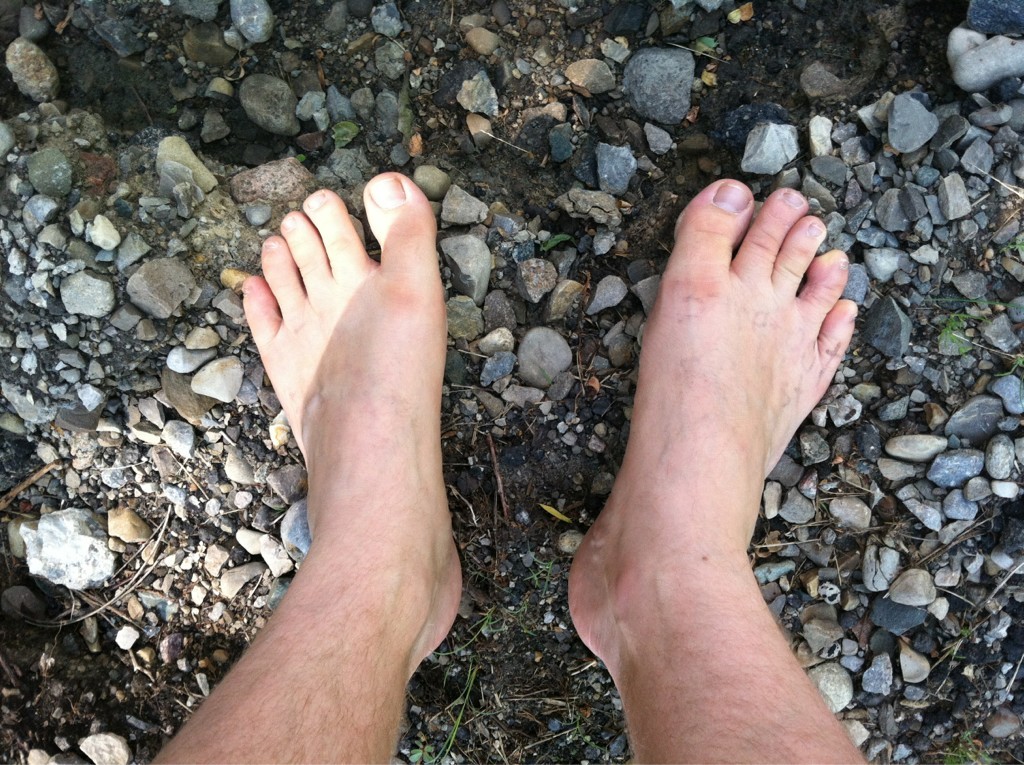 I read a disturbingly bigoted letter to the editor of the Loyala University (New Orleans) campus newspaper, The Maroon. The letter, written by “mass communication senior,” John Bickle, this past April, responds to an article about barefooters on campus. The article itself is fairly lame and doesn’t represent the reality of barefooting at all. Still, the response by Bickle displays such ignorance and bigotry that, as tolerant and relaxed as I try to be, I was upset by it.

It’s not just the fact that Bickle associates all barefooters with “modern hippie culture,” but his utter and obvious lack of understanding of foot health. What’s more, he betrays his class-centered prejudice when he states, “I couldn’t comprehend why students at a private university would walk around like people in a third world country.” As if being barefooted equals abject poverty. Bickle further states, “I can understand walking around sans-shoes to promote a worthy cause, such as Tom’s Shoes’ One Day Without Shoes.” So, it’s ok to be barefooted as long as it supports a multi-million dollar shoe company’s questionable humanitarianism (see Kelsey Timmerman’s article linked below for insight into why I don’t think Tom’s Shoes is so saintly)? He quotes (but fails to cite) a Cal Poly student who apparently goes barefooted to “stick it to the man,” possibly attempting to back up his barefoot hippie argument. Bickle admits that “barefoot running has proven benefits for runners with frequent foot problems,” but ignorantly adds, “walking around barefoot brings health concerns not only for those who go shoeless, but also for everyone around them.” According to Bickle, “The whole purpose of shoes is to protect the feet from bacteria and dangerous objects that can be found on the floor.” Anyone who has walked more than ten feet without shoes can tell you that eyeballs are sufficient to prevent stepping on hazards and unless you’re in one of those third-world countries Bickle mentioned bacteria isn’t a concern.

The idiotic illogic of Bickle’s letter reflects not only a widespread, superstitious prejudice about public barefooting in America, but an underlying persistent cultural bigotry that is readily focused on anyone who exits the mainstream. In spite of decades worth of public social movements in America to overcome racism, sexism, and other “isms,” something as harmless as walking around without shoes still elicits negative responses like Bickle’s. I can imagine many shoe-wearers hearing Bickle’s argument, nodding, then saying, “Yeah, that’s right. It’s crazy to go barefooted.” I’m thankful that I’ve never encountered this degree of open prejudice as a barefooter, but I know many of my fellow barefooters out there have been Bickled. I believe that such ignorance will continue to thrive in cultures that value mainstream group-think conformity over individual expression.

In America one can buy so-called ‘individuality’ at any number of retail establishments, so she or he can be part of some ‘unique’ subculture. As long as the prescription is followed, no boats get rocked. In contrast, us barefooters tend to be dissatisfied with what the mainstream has to offer and attempt to live lives according to what our experiences and creative adaptation teach us. Perhaps Bickle is merely a product of American common nonsense, that particularly dangerous brand of false security in the dictates of normality handed down to us by profit-centered misinformation media. Perhaps mundane mainstream American culture, by its very structure, encourages the thoughtless misjudgment of anything that the TV hasn’t told us is ok. If I could speak to Loyola University mass communication senior, John Bickle, I would tell him to take off his shoes for one week, then tell me if he still believes that “barefoot living is neither sane nor sanitary.” Even if I could tell him this, I doubt he would listen.