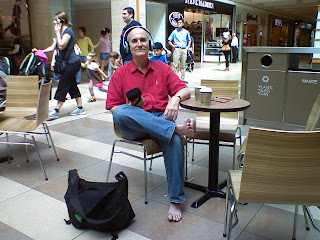 Yesterday, I had the pleasure to meet, interview, and go for a fun barefoot outing with Radio Documentary Producer Frank Faulk.

Frank contacted me last week to do a showcase half-hour radio documentary about my barefoot lifestyle. As part of the exercise, he wanted to go on a barefoot outing with me to a commercial place and experience firsthand any potential hassles; so I suggested that we go for coffee at Fairview Mall – located at the corner of Sheppard Av. & Don Mills Rd. here in Toronto, not far from where I live – especially, because I’ve had a couple of “encounters” with security there in the past.

After a couple of extremely pleasant and extended phone conversations last week, Frank and I agreed to meet at the subway station nearest to my house yesterday morning. I jokingly suggested to him to try and ride the subway from downtown (about a 45 minute ride, with one transfer) in his bare feet. After hearing his reaction to my suggestion, I thought he was definitely not doing it; however, I was pleasantly surprised to see a completely barefooted Frank emerging from the Don Mills subway station as I arrived to meet him – his sandals were not even in sight, as he’d put them into his messenger bag; I can’t tell you what they looked like, since they remained in his bag for the rest of our time together. Right off the bat, I knew it was going to be a neat experience.

After the formalities of greeting each other, we started our short walk back to my place for the first phase of our interview. During our walk through the quiet neighbourhood streets, he started remarking right away on how nice all the different surfaces felt under his bare soles. We walked through a combination of surfaces, including: dirt, grass, some gravel, pavement and concrete sidewalks. Frank also told me that he didn’t feel shy or awkward in the subway system, despite it was a bit busier than expected. He said he felt his recording equipment attracted seemed to attract more attention from fellow passengers than the fact that he was completely bare footed.

Arriving at my home, we made ourselves comfortable in the living room and we proceeded to recording the bulk of the interview. Frank had me tell him about my beginnings as a barefooter, as well as a few recounts of different experiences throughout my barefooting times since I decided to ditch my shoes back in 1993. I must say, it was neat to be able to just “talk” about my experiences as if I were telling them to a friend with no particular sense of a time limit. Although I know the material will be edited for the final radio cut, it was still neat to be able to have a somewhat relaxed chat about my experiences as a barefooter, rather than answering a series of short questions as I get to do on most other interviews.

After spending just over an hour at my place, we started our walk to the mall. Again, Frank remarked on the pleasures of being barefoot; especially on a perfect summer day like today – it was sunny, with a cool breeze and about 22°C.

About halfway to the mall, we bumped into a group of 4 children ages around 9 to 14, I’d say – all of them clad in sneakers and socks, except for one girl who was wearing rubber flip-flops. Frank took advantage of their obvious curiosity to ask them a few questions about barefooting and if they thought it was weird to see us barefoot on the street. It was interesting to hear their responses basically agreeing that we were an odd sight in the city. Also, they all thought it was nice to go barefoot but they couldn’t do it because their parents wouldn’t allow it for the same old reasons we’ve all heard: potential hazards, germs, etc, etc. (And here I was thinking that it was only MY parents the ones who were paranoid about all these things!).

Arriving at the mall, we didn’t have any problems or hassles. I overheard a few people commenting behind us about our bare feet and we got a few glances from other by passers, but that was about that. We then went to a coffee shop that is in the middle of the lower level; which has all the seating in a broadly open area with tons of traffic. You’d think we could have been completely invisible, since no one paid attention to us as we sat with our bare feet in plain view. Not even people sitting right next to us at adjacent tables to ours would give us a glance; so far so good…

After sipping on our coffees for about half an hour with no reaction from anyone at the mall, Frank was ready for some “real action” so he suggested we try going into some stores to see if we could get in trouble. I then suggested we go on the second floor to the more upscale stores where our bare feet would be probably least desired. We first tried “Feet First”, a shoe store. We pretended to be interested in some of the shoe selection. I noticed one of the clerks was looking at us quite intently, but she didn’t make any efforts to talk to us or offer any help – the other two employees seemed totally oblivious to our presence in the store. Then, we decided to try Club Monaco to check out some clothes there…

As we crossed the wide hallway and we were approaching the store entrance, I noticed with the corner of my eye that two security guards were following us – gosh! This time they even sent backup! I thought we were going to be intercepted before entering the store, but I was wrong. We managed to browse through the store (gosh their prices are ridiculous! $99 for a cotton summer shirt – yikes!), and got greeted in a friendly way by two different clerks while in there. I noticed that the security guards were posted on either side of the store door, waiting for us to exit.

Right on cue, as we were exiting the store, one of the “agents” flagged us down. I must admit, they both were rather nice and polite. They first greeted us and called us “gentlemen” (that surely is a first!), they asked if we were shopping – rather stupid question, at the mall, but I guess they felt the need to make idle chat somehow. I can’t help but think that Frank’s recording device, and rather obvious earphones, had something to do with the apparent need to have an extra guard to approach us, as well as the unusual politeness these two displayed at this time. They finally got to the point by inquiring about our lack of footwear.

We explained that we liked going barefoot and that we had “backup” footwear in case it was needed. They proceeded to tell us we needed shoes at the mall for safety reasons, since we could slip and fall, so the mall would be liable; so shoes would be required if we needed to stay in the mall any longer. Being happy with documenting this encounter with mall security, Frank and I decided it was time to leave anyway. So we told the guards we didn’t need to remain in the mall and that we were going to leave.

To my amazement, the guards didn’t push the issue any further and they let us proceed through the Sears store to get back to the subway without escorting us and without forcing us to put wear our sandals on our way out. Again, I think Frank’s recording device had something to do with that; since they probably knew this exchange was somewhat being documented, even though we didn’t give away any information about the documentary or Frank’s work – I must get me one of those things!

Once outside the mall, Frank and I said our farewells and agreed to stay in touch. I was very happy to learn he is interested in doing some more barefooting with me in the future. I was also extremely impressed to see him enter the subway station for his ride back downtown completely barefoot.

I’m very much looking forward to listening to this documentary. I’ll make sure to post the appropriate link!